several months ago on a Sunday afternoon, Mr S decided to go out in the boat. He got the dogs (his faithful companions) and all his gear and went to get the boat ready to take to the lake. ...Well, it wasn't too long before he came back to the house with the news that we had been robbed! The boat motor was stolen right off of the boat in the yard.
He called the police and filed a report..... then on Monday Mr S went to the local marina to see if anyone had tried to sell one. Much to his delight they had the guy on tape trying to sell what looked like our boat motor.
Anyway, many months later (2 weeks ago) Mr S got a subpoena to appear in court this morning. We went---it was hot---it was crowded---it was sad (so many people in bad situations)-- not to mention that i had to go back to the car twice after we got there because you cant have a cell phone--OK I get that-- but you cant have a camera either!!---anyway-- the guy was ordered to pay restitution by 9/14/09 or we have to go back....sigh.....
so today's POTD is the courthouse 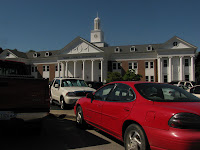 Oh, wow! That's awesome that they caught him, though! :-)

OH MY GOODNESS! Good for Mr. S to see if someone tried to to sell it! And remarkable that they had it on tape. Is the motor still in working condition? Will you get it back soon?

Hope you get it back soon! that sucks

Oh, that is awful! I hope you get your restitution payment but my experience is that they hardly ever come through. It's like adding insult to injury when you win a judgement but can't collect.