last of the vacation fun 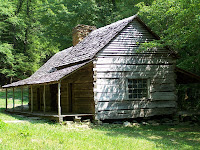 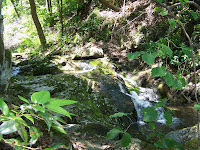 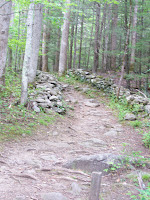 We also visited the Roaring Fork Motor Trail which is part of the Great Smoky Mountain National Park. It is right up the street -literally- from the resort near the middle of Gatlinburg. It was a easy drive around the loop. I think it was 6 miles long. Anyway one of the first things is the Noah “Bud” Ogle Place which was a farm in 1879 when Bud brought his bride, Cindy, to the community of White Oak Flats –what is now Gatlinburg. It has a old home place on the site and then some outbuilding such as the barn and corn crib.

The Ogles had running water!! very unusual for this place and time. Wood was fashioned into a open flume and it then ran to and was dumped into large “sink” trough near the back door... funny isn't it that we think the “modern” folks were the inventors of all the conveniences we take for granted.

One of the other things described in the brochure was a “weaner” cabin-- a concept a lot of people are aware of but didn't know that is what it was called back then. This was a cabin that was available for the newly married children of the family. The newlyweds were allowed to live in this small cabin for one year while establishing a place of their own. Pretty cool huh?

The other thing I found really interesting is the concept of a “tub” mill. This looks much different that the regular grist mill that we are mainly familiar with. Again from the brochure--" this is a horizontal water wheel originally enclosed in a wooden tub-like casing. Eventually the tub was omitted and the wheel was left open No one knows when it was inventor, but it was widely used by the ancient Greeks, Romans and Asians. This was the “Norse type”mill. All of the materials were readily available free in the forest to anyone who knew how to collect and assemble them except for a couple of iron bearings.” It looks much like a regular grist mill we are accustomed too except sideways 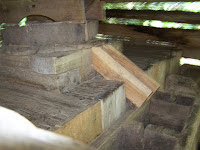 The rest of the trail was equally as beautiful-- you would never believe we were only a couple of miles from a bustling tourist town-- it was very secluded and peaceful. We didn't get to do much more exploring as it was getting dark, and the summer rain started to fall. We will defiantly be going back to explore this part of the past that is preserved in the Great Smoky Mountain National Park. 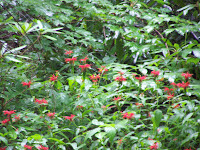