Abbie has been born

Abigail Elizabeth S.... "Abbie" arrived at 11:01 am in Louisville. According to all reports she is adorable (of course). She weighed in at 6+ lbs and 18 inches long. Brad and Susie (to be known as Mamaw and Papaw) had been there about 20 minutes before her birth. They have promised to send some pictures of her when Mamaw and Papaw get home this afternoon.
I just finished the lullaby albums and need to get them ready to mail tomorrow........ oh well they will have pictures already to go in when it gets there. 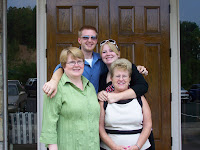 My best friend-Judi's- daughter and grandson were here this weekend. Brandon has really had a rough time for many years but seems good now. He actually got up to speak to the church this morning after the service was over. He is the same age as Katie only 22. He started his portion by saying that he was Judi's grandson and had come to our Church many times as a little boy to VBS and to church in general every summer. Anyway, he told that as a young teen he suffered a terrible beating by another student and as a result he has suffered PTSD (post traumatic stress disorder) since then. He says he has now been diagnosed with Bipolar disorder and is a recovering alcoholic and drug addict. He went on to say that he wished he had all the money he had stolen and spent on drugs and alcohol since he was about 15-16 yrs old. He said he was arrested (again ----and he also says it is not a fun place to be in case anyone didnt know ) a year or so ago and his Mom came to get him out of jail that Saturday night. She said that he had to go to church the next day. He said God put a lady in his path who asked him if he would like to play drums in their church with the band. And he started going to AA- nothing happens abruptly but he said that was the start of his new beginning. I know from things Judi has told me that the church band has been a wonderful thing for him. He wanted to share with us how his life has changed. He is now gainfully employed at UPS, plays drums in the church band, lives his life better than ever before , He takes meds every day for his mental health issues but he is growing and growing. He will start back to school in the fall and he wants to work with young people like himself who has mental and behavioral health issues. He will be good at it.
Having Brandon at church this morning got Mark and I talking about kids like Brandon and Daniel. Troubled as teens and having a rough time with life. Daniel is our nephew who was born less than 3 months before we were married---so he is 28. Daniel was a ADHD kid to the 100th degree. He was a loving little boy, but so active and busy that I frequently lost my temper with him and was sure glad God had not given him to me. Dan had a rough time as a teen also. I don't know details since they lived in FL at the time but I know Dan was troubled and not motivated. Today he is working at a facility for young people that are troubled... He is in the Army National Guard and has a nice girlfriend. He has grown into a wonderful young man. When you watch him with his niece and nephews it is a joy. He still is . . . active (lol) but he has grown into a man I admire--- he and Brandon are my new hero's
Posted by Brenda is SO Blessed at 6:30:00 PM

Hi Brenda,
Just wanted to let you know that your beautiful post really moved me. I love hearing about young people who have managed to turn their lives around or have been able to make the most of their abilities and work around their disabilities.
And glad to see you writing on the blog again!