a dog with 1/2 a haircut??? You may ask what the heck that is... Our elder dog Saidey the Cocker Spaniel who just turned 14 in February seriously HATES to have her haircut. She does just about everything but die on the spot. She trembles and pants and her paws sweat tons.
Despite her age and going to the groomer for years and years she has never got over her fear--we have even gone and stayed with her while she is trimmed. Anyway several years ago I bought some clippers and manage to try to cut her hair as best as i can. (now most of the time she looks much like a rat has tried to chew her hair off but it is OK because it is much easier on her and I don't want to sedate her to take her to the groomer) She isn't a show dog or anything just a beloved pet.
Anyway--- most of the time it takes both of us several days to get her entire body cut because she freaks out and , frankly, I get worn out with trying to dodge her nipping the clippers and trying to hold her. So--sometimes in the fall and summer you will see a black (and now grey) dog with half of her hair cut running around our yard.....sometimes the front is longer and sometimes the back is longer---occasionally the left or right is longer-- for a day or two until we get her all done.
This time i started on Saturday--had a migraine on Sunday and it was cold and rainy yesterday and today---so ...she has her ears done, and part of the front and back and she is all fuzzy in the middle But we Love her just the way she is---clipped or not---or even 1/2 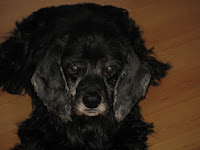 hhahahaa she looks so angry!! but so cute :) where is everything between thursday and tuesday???

hee hee That is adorable!

poor little dog. I know you love her no matter how much she is shaved. I can just imagine her nipping at you. that would be exhausting.