Mo doggy goes to the vet--and the fence comes down 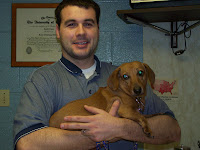 So... late yesterday afternoon and last night I noticed Mo was not his usual happy-tail doggy self. OK-- the dog is a trash compactor in dog form and I thought he may have over eaten or something. But when it came time to go outside for the last time I noticed he was having trouble going down the steps. We gave him one of Sadiey's Remidyl capsules (he had taken the same dose as she had 9 years ago when he hurt his back) to help with the pain. Like I said -- he had a back injury 9 yrs ago when he was only a year old. We thought at that time that he might not pull through it because it was a severe injury with some nerve damage... but after MONTHS of doggy bed rest, meds and TLC he was OK. Eventually even his doggy rear-foot drop went away and he had no problems.
So this morning when his tail was still not waggy I called the vet and off we went. After exams, xrays and (I'm sure in Mo's mind torture) pinching and prodding the diagnosis is back. He has a back injury again--- not near as bad as last time--but he is nearly 10 years old this time. He is on high dose steroids, back on doggy bed rest and "tincture of time" (what one of the Dr's i used to work for called wait and see) He has to be carried up and down stairs and NO jumping etc.

I usually try to get the pic 'o the day early in case nothing much happens--which is what I did when Mo went to see Dr Bass. Little did I know what the rest of the day would bring.

After we got settled in back at home Mark tackled the back yard earth moving project. (There are still about 5 P/U loads of dirt that need to be moved to complete the water fall area and the building site) Anyway, since it was to be near 70 degrees today seemed like a good day to move some dirt. He is doing this all by hand mind you--- no earth moving equipment other than a pick, shovel and wheelbarrow. Mark got the truck loaded with about 2 tons of dirt and got ready to go down our steeeep driveway to unload. He enlisted my help to move the car which was at the bottom of the driveway "so I don't slide into the car in case I skid down the driveway". Well two tons of dirt dragging a truck down a steep driveway--- driver unable to control the slipping and the bottom of the yard fence is under the truck. He actually got a little stuck and had to really try to run down the fence because he couldn't move any other way. That fence post he put in didn't want to move but there was no other way around it and over the fence he had to go. 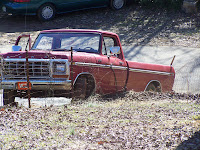 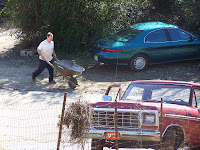 But, being the wonder-man he is, now the truck is unloaded, the fence is repaired(so the doggies don't get in the road and get smashed) and he is in the shower. OK so this is not a big disaster because we are planning on replacing this fence soon anyway with a picket fence --just not yet. Again I sing his praise--what a man, what a man, what a mighty fine man