Years ago ,nearly 10years in fact, when I met my friend Rhonda she was not known for her cooking skills. She was pretty young and had not been cooking for long and ---well she had some disasters. LOL Actually her hubby Don did most of the cooking.
One of our family's "Rhonda Stories" was about spaghetti and involved a Crock-pot. Rhonda and Don had gotten a Crock-pot as a wedding gift and Rhonda (being Rhonda after all) had not tried it. One day she attempted to make spaghetti in the noble pot........ no, not the sauce but the actual pasta part of the dish! What we laughed about was her exact wording... "..it didn't work too well. The noodles and the water cooked for hours and the noodles never did get soft. After 10 hours they were still crunchy!"
Now you have to understand our girl Rhonda. A sweeter, better,gentle person has never walked on the face of this earth. She is such a good friend and always eager to help you or explain to you a solution to a problem if you have one. She is also a A-#1 prayer partner-- I told her one time her prayers always seem so sincere and like they go straight up to heaven to God's ear. Hope you understand what I mean. She may be a little naive (she didn't know that Elton John is gay and wasn't sure where the World Trade Center was on 9/11) but she is a wonderful person!
Anyway for years now, around this household she had been nicknamed "Crock pot Spaghetti Rhonda". Believe me this name is given with love. As a matter of fact when Katie had her appendix removed Rhonda one of her first visitor's. She called to see if we needed anything and Katie asked if I meant "Crock -pot Spaghetti Rhonda" when I told her who was on the phone.
Where is this long story going?--the the picture of the day of course. my best good-friend Becky, from Maryland sent me a recipe for "Crock-pot Mac & Cheese" which I made for dinner tonight and it is yummmy. And worked in the Crock-pot

I had mine on for 3 hours and it was more than done. I kicked it up a notch by turning the crock pot off and sprinkling the top with shredded cheddar.

and the pic of the day: 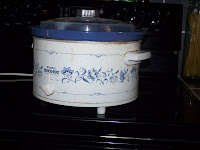 funny story!! We all have to learn somehow, right? And from mistakes are sometimes the best teacher.
Yes, you should get a picture of the goody's since the headqtrs are there.
I love seeing what others are doing for their picture to get ideas. Your picture didn't attach (well, I couldn't see it anyway) Are you putting them all on flickr or anywhere? I am.