today my sweetie, Mr S, bought me a big box of Russell Stover candy...because he knows I really like it. He really is such a good man...I got one of the last good ones. We have been married 28+ years and he is still my best friend. I got to talk to Katie on the phone and got a sweet Valentine from her and from my brother and sister in law. Wish we could have been with them.

Tonight to celebrate the holiday we had a little dinner party. Mr S' sister Lois and her hubby (also Mark) came over and I got to cook for them. One of my favorite things to do since there are only the two of us at home now. Anyway we had salad, lasagna, fresh baked bread, and home made cheesecake---well it was all made from scratch- yummm 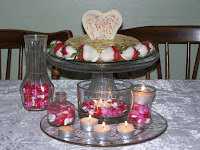 I gotta admit I had a great time making everything. I got a lot of antique glass containers and plates and filled them with red, pink and white M&M's and tea lights for the centerpiece. That and the cheesecake surrounded by strawberries in the snow. again yummm

The best thing that happened was when we were sitting around talking and somehow the age of our kids came up.. I said something to the effect of Daniel being 28...Lois said "no he's only 27" anyway the conversation ensued that he was born in 1980 and that was the year we got married and he was 28 because he just had a birthday---well poor Lois couldn't get it right somehow and kept insisting he was 27, and Kara was 25 and Amy 23. Mark M kept saying no--he's 28, Kara is 26 and Amy is 23---- You really had to be here but it was hysterical. She finally called Daniel and by this time we were all laughing at her. She asked Dan how old he was (on speaker phone) he first asked her if she was serious and because I was laughing so much he asked if we were drinking -which was really funny because we don't drink alcohol--
Posted by Brenda is SO Blessed at 11:27:00 PM